James Robertson (1813–1888) was an English gem and coin engraver who worked in the Mediterranean region, and who became a pioneering photographer working in the Crimea and possibly India. He is noted for his Orientalist photographs and for being one of the first war photographers.

Background and Scope of the Collection

Background and Scope of the Collection

Roger Fenton’s Crimean War photographs represent one of the earliest systematic attempts to document a war through the medium of photography. Fenton, who spent fewer than four months in the Crimea (March 8 to June 26, 1855), produced 360 photographs under extremely trying conditions. While these photographs present a substantial documentary record of the participants and the landscape of the war, there are no actual combat scenes, nor are there any scenes of the devastating effects of war.

The Library of Congress purchased 263 of Fenton’s salted paper and albumen prints from his grandniece Frances M. Fenton in 1944, including his most well-known photograph, “Valley of the Shadow of Death.” This set of unmounted photographs may be unique in that it appears to reflect an arrangement imposed by Fenton, or the publisher, Thomas Agnew & Sons, and yet is a set of prints that was not issued on the standard mounts sold by the publisher. It is possible that this collection is comprised of a set of prints kept and annotated by Fenton himself.

The Library of Congress purchased 263 of Fenton’s salted paper and albumen prints from his grandniece Frances M. Fenton in 1944, including his most well-known photograph, “Valley of the Shadow of Death.” This set of unmounted photographs may be unique in that it appears to reflect an arrangement imposed by Fenton, or the publisher, Thomas Agnew & Sons, and yet is a set of prints that was not issued on the standard mounts sold by the publisher. It is possible that this collection is comprised of a set of prints kept and annotated by Fenton himself. 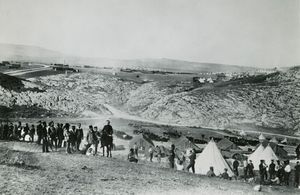 Crimean War, (October 1853–February 1856), war fought mainly on the Crimean Peninsula between the Russians and the British, French, and Ottoman Turkish, with support from January 1855 by the army of Sardinia-Piedmont. The war arose from the conflict of great powers in the Middle East and was more directly caused by Russian demands to exercise protection over the Orthodox subjects of the Ottoman sultan. Another major factor was the dispute between Russia and France over the privileges of the Russian Orthodoxand Roman Catholic churches in the holy places in Palestine.
CRIMEAN WAR EVENTS 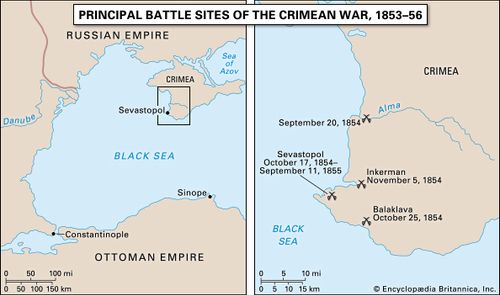 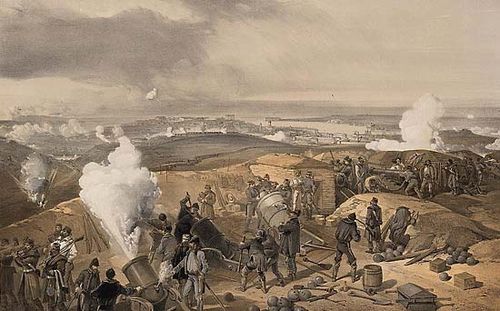 Supported by Britain, the Turks took a firm stand against the Russians, who occupied the Danubian principalities (modern Romania) on the Russo-Turkish border in July 1853. The British fleet was ordered to Constantinople (Istanbul) on September 23. On October 4 the Turks declared war on Russia and in the same month opened an offensive against the Russians in the Danubian principalities. After the Russian Black Sea fleet destroyed a Turkish squadron at Sinope, on the Turkish side of the Black Sea, the British and French fleets entered the Black Sea on January 3, 1854, to protect Turkish transports. On March 28 Britain and France declared war on Russia. To satisfy Austria and avoid having that country also enter the war, Russia evacuated the Danubian principalities. Austria occupied them in August 1854. 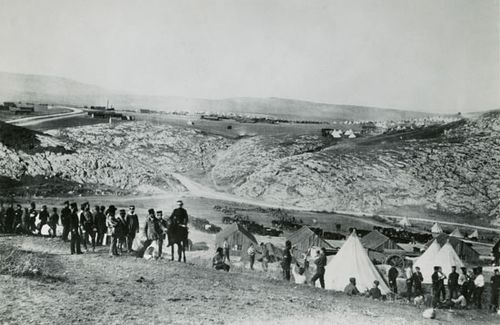 In September 1854 the allies landed troops in Russian Crimea, on the north shore of the Black Sea, and began a yearlong siege of the Russian fortress of Sevastopol. Major engagements were fought at the Alma River on September 20, at Balaklava on October 25 (commemorated in “The Charge of the Light Brigade” by English poet Alfred, Lord Tennyson), and at Inkerman on November 5. On January 26, 1855, Sardinia-Piedmont entered the war and sent 10,000 troops. Finally, on September 11, 1855, three days after a successful French assault on the Malakhov, a major strongpoint in the Russian defenses, the Russians blew up the forts, sank the ships, and evacuated Sevastopol. Secondary operations of the war were conducted in the Caucasus and in the Baltic Sea.

After Austria threatened to join the allies, Russia accepted preliminary peace terms on February 1, 1856. The Congress of Paris worked out the final settlement from February 25 to March 30. The resulting Treaty of Paris, signed on March 30, 1856, guaranteed the integrity of Ottoman Turkey and obliged Russia to surrender southern Bessarabia, at the mouth of the Danube. The Black Sea was neutralized, and the Danube River was opened to the shipping of all nations.

Get unlimited access to all of Britannica’s trusted content.Start Your Free Trial Today

The Crimean War was managed and commanded very poorly on both sides. Disease accounted for a disproportionate number of the approximately 250,000 casualties lost by each side, and, when news of the deplorable conditions at the front reached the British public, nurse Mary Seacole petitioned the War Office for passage to Crimea. When she was refused, Seacole financed the trip to Balaklava herself and established the British Hotel, an officer’s club and convalescent home that she used as a base to treat the sick and wounded on the battlefield. Improvements made to the field hospital at Üsküdar by British nurse Florence Nightingale revolutionized the treatment of wounded soldiers and paved the way for later developments in battlefield medicine.

The war did not settle the relations of the powers in eastern Europe. It did awaken the new Russian emperor Alexander II (who succeeded Nicholas I in March 1855) to the need to overcome Russia’s backwardness in order to compete successfully with the other European powers. A further result of the war was that Austria, having sided with Great Britain and France, lost the support of Russia in central European affairs. Austria became dependent on Britain and France, which failed to support that country, leading to the Austrian defeats in 1859 and 1866 that, in turn, led to the unification of Italy and of Germany.

The Editors of Encyclopaedia BritannicaThis article was most recently revised and updated by Michael Ray, Associate Editor.