Have Bill Gates and his eugenicist foundation’s crimes against humanity finally caught up with him? If the Supreme Court of India has anything to say about it, he will face the ramifications of poisoning millions of Indian children with vaccines.

“While fraud and corruption are revealed on almost a daily basis now in the vaccine industry, the U.S. mainstream media continues to largely ignore such stories. Outside the U.S., however, the vaccine empires are beginning to crumble, and English versions of the news in mainstream media outlets are available via the Internet.

One such country is India, where the Bill & Melinda Gates Foundation and their vaccine empire are under fire, including a pending lawsuit currently being investigated by the India Supreme Court.”

If you aren’t aware of the key players in the vaccine mayhem being driven into African countries, they are:

All four of these organizations will now be expected to explain themselves due to a writ of petition originally submitted to the Supreme Court of India in 2012, by Kalpana Mehta, Nalini Bhanot, and Dr. Rukmini Rao, which has finally been heard by the courts.

“BMGF, PATH and WHO were criminally negligent trialling the vaccines on a vulnerable, uneducated and under-informed population school administrators, students and their parents who were not provided informed consent or advised of potential adverse effects or required to be monitored post-vaccination.”

Furthermore, though absent from most mainstream U.S. media outlets, the Economic Times of India published their report in August 2014, stating that young tribal girls were tested with HPV vaccines. This involved not a handful of children, but 16,000 individuals in Andhra Pradesh, India, where they were given the Gardasil vaccine.

KP Narayana Kumar reported that within a month of receiving the vaccine, many of the children fell ill, and by 2010, five of them had died. Another two children were reported to have died in Vadodara, Gujarat, where another 14,000 tribal children were vaccinated with another brand of the HPV vaccine, Cervarix, manufactured by GlaxoSmitheKline (GSK), who incidentally, has been accused of dumping polio virus into a Belgium river.

Consent forms to administer the HPV vaccine were ‘illegally’ signed by wardens form youth hostels, showing that the Gates’ prey on the indigent without parents. For those who had parents, most were illiterate, and the true potential dangers of the vaccines were not explained to them.

SAMA, an organization in India which promotes women’s health discovered this insidiousness, and reported it, but only now will Gates and his cronies have to answer for their misdeeds. Approximately 120 girls reported epileptic seizures, severe stomach cramps, headaches, and mood swings, of those who did not die. Other girls receiving the Gardasil vaccine have experienced infertility.

“The SAMA report also said there had been cases of early onset of menstruation following the vaccination, heavy bleeding and severe menstrual cramps among many students. The standing committee pulled up the relevant state governments for the shoddy investigation into these deaths.

It said it was disturbed to find that ‘all the seven deaths were summarily dismissed as unrelated to vaccinations without in-depth investigations …’ the speculative causes were suicides, accidental drowning in well (why not suicide?), malaria, viral infections, subarachnoid hemorrhage (without autopsy) etc.”

The Bill and Melinda Gates Foundation declared their little vaccine project a total success. I guess the Supreme Court of India will decide that now.

The vaccines given to African children are also MORE toxic than the ones we have because they are expired lots, are not refrigerated in remote places with no electricity, are batches that have been recalled in the West because they have been found to kill or maim more children than the usual rate, or are vaccines that nobody wanted to buy, like the highly toxic H1N1 vaccine. (Most of the children in Uganda, like the one above, were given the H1N1 vaccine. Might pigs fly from South America to Africa??) To destroy these expired or unsold vaccines would mean billions in losses for pharmaceutical companies. So what do they do? They get their shareholders, who are also the main decision-makers in the WHO, to buy the vaccines off from them. Then they dump these vaccines in poor third-world countries like Africa and India under the guise of charity, where people are illiterate and deaths and vaccine injuries are never reported in the media because there is no media in their cow-dung sheds!! Children who do not die immediately will suffer for a few months or years before they eventually die from brain damage. Who gave them these vaccines? Unicef. And who promotes Unicef? Angelina Jolie. (Among others.) 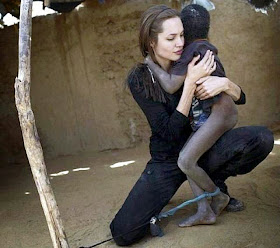 This child, and many others like him, has severe brain damage. He is tied to the post to prevent him from wandering off and getting eaten by lions, or falling into the well during a seizure. Wandering is what children with brain damage do (like children with autism). When the brain damage is severe enough, the victim has seizures too. The condition is named “African Nodding Disease” where the child stares blankly for a few minutes and the head falls forward briefly like someone nodding off to sleep.

Watch this video and you will have a good idea of what “Nodding Disease” is.

(NaturalNews) If Monsanto, the most evil corporation in the world, were a person, his name would be Bill Gates. Yes, the Microsoft founder-turned-icon of Third World humanitarianism is an absolute crook, and an utterly vile one at that. Reports indicate that Gates’ many crimes against humanity in the form of illegal vaccine testing on innocent children are finally being addressed in a new lawsuit filed by the Indian government, which seeks to stop this demon of death from killing any more babies.

The Supreme Courts of India are currently conducting an extensive investigation into the Bill & Melinda Gates Foundation’s devious actions abroad, which mainly involve testing deadly vaccines on poor, and oftentimes illiterate, children in developing nations without informed consent. According to Health Impact News, the case focuses specifically on illicit human experimentation that occurred with the two available vaccines for HPV, Cervarix (GlaxoSmithKline) and Gardasil (Merck & Co.).

Back in 2009, the Gates Foundation quietly funded trials of Gardasil on some 16,000 tribal school children living in Andhra Pradesh, India. According to a report published in Economic Times India back in August, many of the children fell violently ill not long after receiving the vaccine, and at least five of them died.

In a separate trial of Cervarix that took place around this same time, also funded by the Gates Foundation, an estimated 14,000 tribal children in Vadodara, Gujarat, were vaccinated for HPV. The result of this trial was two children dead and possibly hundreds of others severely injured. In both trials, many of the consent forms used were obviously forged, and many of the children’s illiterate parents were coerced into signing consent forms with their thumbprints, not really know what they were doing.

A petition condemning these atrocious crimes against humanity notes that the Gates Foundation, as well as the World Health Organization (WHO) and the Program for Appropriate Technology in Health (PATH), both of which supported the trials, were “criminally negligent” for testing deadly vaccines on “a vulnerable, uneducated and under-informed population [of] school administrators, students and their parents who were not provided informed consent or advised of potential adverse effects.”

It wasn’t until a non-governmental organization known as SAMA began investigating the two trials that these Nazi-like experiments on human beings were finally brought to light. But none of the controlled media in the U.S., or anywhere else in the West for that matter, agreed to cover it. The only country that took notice was India, which is now seeking justice against Gates and his band of vaccine terrorists.

Sadly, this isn’t the only time that Gates and his crew were found to have committed evil acts against the world’s most vulnerable. In December 2012, five children in the small town of Gouro, Chad, were forcibly vaccinated with a meningitis A vaccine that was still in trials and not even approved for commercial use. The children were told that if they didn’t agree to the vaccine, which was administered without parental consent, they would not be allowed to receive any further education.

And again in 2013, both the Gates Foundation and GAVI, the Vaccine Alliance, were exposed for forcing untested polio vaccines and 5-in-1 pentavalent vaccines on innocent children in Pakistan. Many of the children developed so-called “non-polio acute flaccid paralysis,” or NPAFP, which reports indicate is twice as deadly as polio itself.

More on the Gates Foundation’s extensive legacy of killing children with vaccines is available here:
VacTruth.com.

Sources for this article include: